Modular construction: From projects to products

Shifting construction away from traditional sites and into factories could dramatically change the way we build. Will modular construction make a sustainable impact this time around?

For decades, construction has lagged behind other sectors in productivity. Modular construction offers the industry an opportunity to make a step change: shifting many aspects of building activity away from traditional construction sites and into factories with off-site, manufacturing-style production.

Modular (or prefabricated) construction is not a new concept, but technological improvements, economic demands, and changing mind-sets mean it is attracting an unprecedented wave of interest and investment. If it takes hold, it could give the industry a huge productivity boost, help solve housing crises in many markets, and significantly reshape the way we build today. Our new report, Modular construction: From projects to products, dives deeper into the issues. 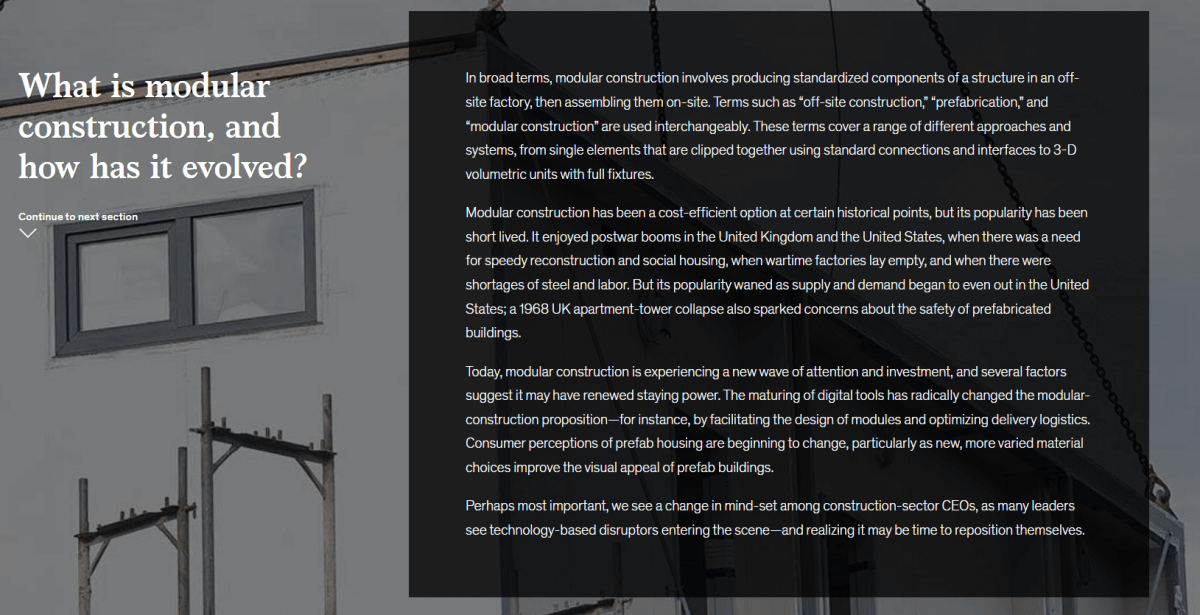 Construction is one of the world’s largest sectors, so a profound shift in the sector can have a major impact on global economic productivity—and recent modular projects have already established a solid track record of accelerating project timelines by 20 to 50 percent. 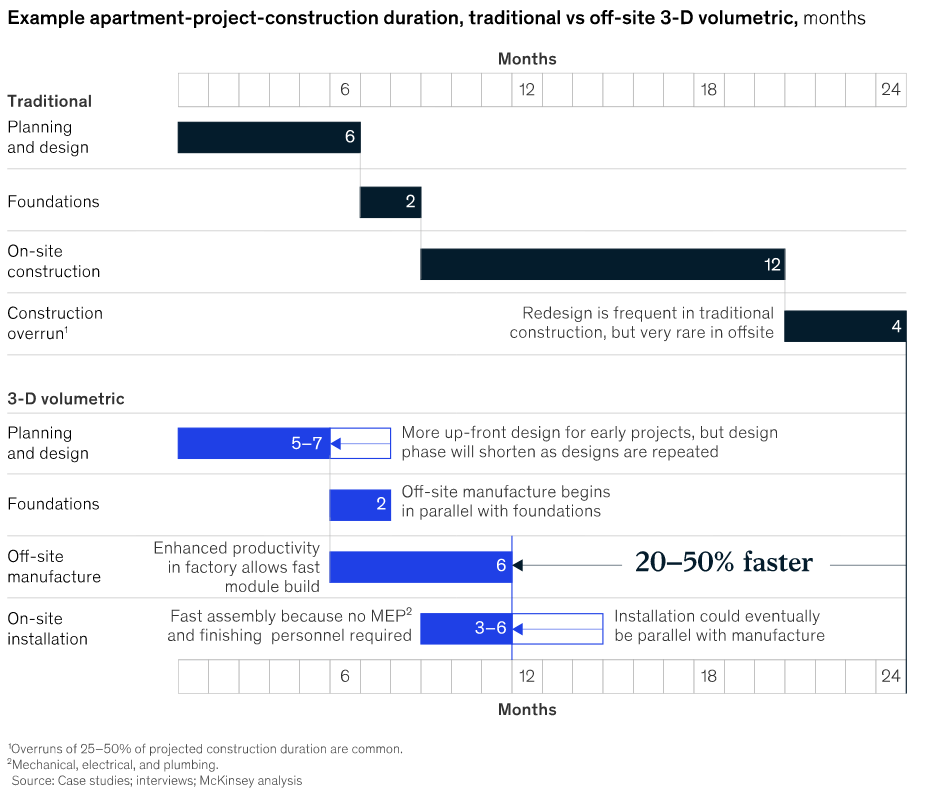 The modular approach also has the potential to yield significant cost savings, although that is still more the exception than the norm today. As supply-chain players advance along the learning curve, we believe that leading real-estate players that are prepared to make the shift and optimize for scale can realize more than 20 percent in construction-cost savings, with additional potential gains in full-life costs (for instance, through reducing running costs via energy and maintenance savings). 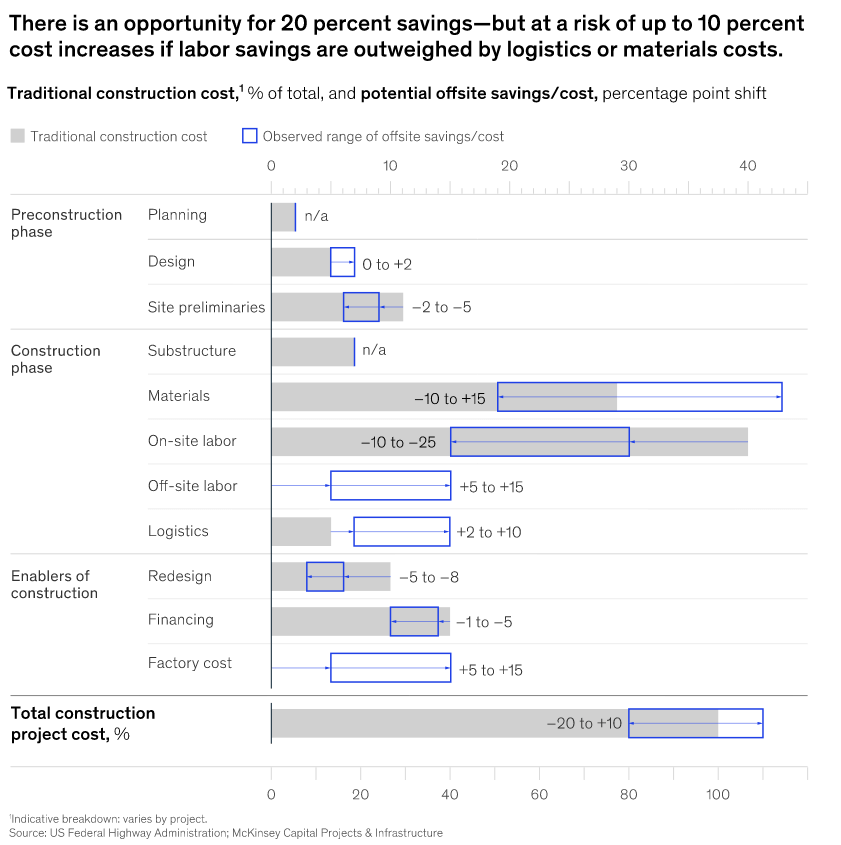 Under moderate assumptions of penetration, the market value for modular construction in new real-estate construction alone could reach $130 billion in Europe and the United States by 2030.

To date, prefabricated housing has achieved a sustainable foothold in only a few places, including Japan and Scandinavia. In markets such as the United Kingdom and the United States, it has been in and out of favor since the postwar era. However, modular construction in European and US markets has the potential to deliver annual savings of up to $22 billion, and there is reason to believe the current revival could be different. The industry is adopting new, lighter-weight materials as well as digital technologies that enhance design capabilities and variability, improve precision and productivity in manufacturing, and facilitate logistics. Countering the old reputation of prefabricated housing as an unattractive, cheap, poor-quality option, some builders are focused on sustainability, aesthetics, and the higher end of the market. New entrants and first movers that are unwilling to tolerate the industry’s fragmentation and lagging productivity are starting to disrupt the market and change the mind-sets of incumbents.

In many countries, modular construction is still very much an outlier. But there are strong signs of what could be a genuine broad-scale disruption in the making.

Many factors determine whether a given market is likely to embrace modular construction, but the two biggest determinants are real-estate demand and the availability (and relative costs) of skilled construction labor. In places such as Australia’s East Coast, Germany’s major cities, the southern part of the United Kingdom, and the US West Coast, labor shortages and large-scale unmet demand for housing intersect, making this model particularly relevant. 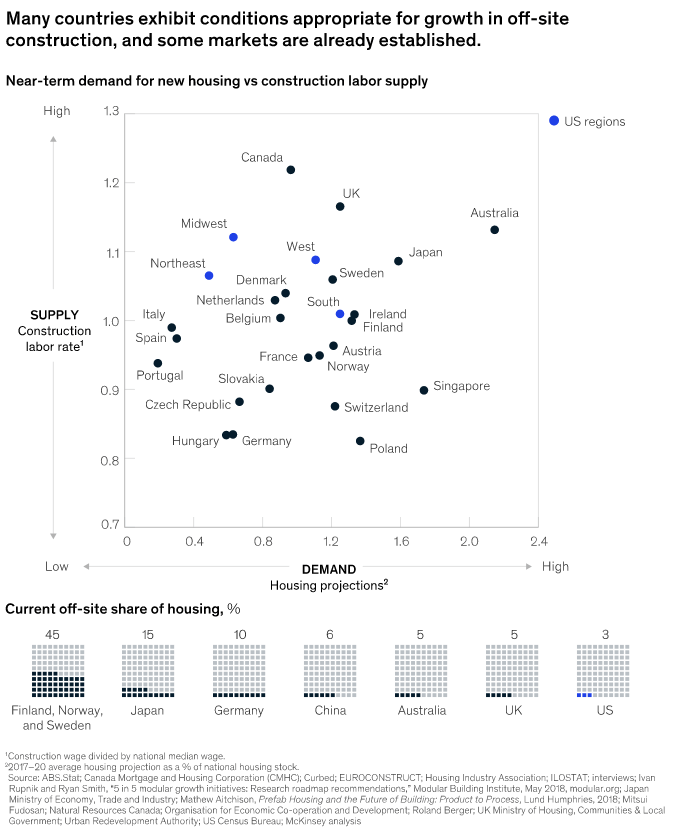 A real-estate disruption in the making

Capturing the full cost and productivity benefits of modular construction is not a straightforward proposition. It requires carefully optimizing the choice of materials; finding the right mix of 2-D panels, 3-D modules, and hybrid designs; and mastering challenges in design, manufacturing, technology, logistics, and assembly. It also depends on whether builders operate in a market where they can achieve scale and repeatability.

In many countries, modular construction is still very much an outlier. But there are strong signs of what could be a genuine broad-scale disruption in the making. It is already drawing in new competitors—and it will most likely create new winners and losers across the entire construction ecosystem. Different stakeholders face a series of choices.

Realizing the benefits of modular construction will require different stakeholders to make a series of choices. Developers, for example, need to identify segments of the portfolio that can serve as their “product core”; investors, on the other hand, must focus more on markets likely to be disrupted and trends defining winners and losers.

For example, a good starting point for developers is to identify the segments of a portfolio where volume and repeatability come into play. These can be designed as a “product core” that remains consistent across developments. Developers should assume that successful modularization will require more than merely asking suppliers for tender offers on existing designs; rather, they will need to work with the supply chain to optimize for manufacturability and make the right trade-offs among quality, cost savings, and time savings.

Meanwhile, for investors, the anticipated disruption will create a very different-looking landscape. This makes it a particularly interesting sector for smart investors seeking alpha at this time. They should look to understand the markets that will most likely be disrupted and the detailed trends, strategies, and capabilities that will set the winners and losers apart.

Building-materials suppliers will face a shift in the choice of materials available to customers and prefabricators. For instance, cement companies will be affected if cross-laminated timber and steel-frame-based modules gain market share. Materials suppliers may also face an entirely different go-to-market landscape. Their customers may no longer be fragmented installers or traditional distributors but rather larger manufacturers that are optimizing for different objectives. However, these suppliers may be well positioned to enter the prefabrication space, given their knowledge both of traditional construction and of efficient manufacturing and supply-chain environments.

Modular construction in European and US markets has the potential to deliver annual savings of up to $22 billion.

Public-sector entities, like private-sector developers, will be able to capture cost savings and productivity benefits by taking a modular approach with any large-scale publicly funded projects that have repeatable elements, such as schools and affordable housing. At the same time, the public sector has an additional role to play in facilitating modular adoption by modernizing building codes—which dovetails with the goal of removing barriers to more housing. Approval processes can be faster and more efficient if product designs and production processes can be approved in factories rather than on each individual project site, thus reducing the on-site inspection burden solely to assembly verification.

Finally, engineering and construction companies should consider preempting the trend that will see on-site construction becoming a smaller and more commoditized part of the value chain. Today, general contractors manage complex on-site projects with many subcontracted trades involved, but they may risk being cut out of a value chain focused on simple module assembly that brings with it a high degree of cost and schedule certainty.

After decades of relatively slow change, an at-scale shift to modularization—alongside digitization—looks likely to disrupt the construction industry and broader ecosystem. All players should evaluate the trend and impact, and assess their strategic choices, to ensure they can benefit rather than risk being left behind.